Hi, My name is Julian Holden and I’ve known Ray for about two years. Ray came on a marketing course I run at City Lit and since them we’ve met to discuss his website on a few occasions. I’ve been encouraging him to write a blog so that prospective clients can see what a nice and knowledgeable guy he is. Unfortunately he is too busy doing what he does best to often find time for this so I’ve stolen the keys to the website to do him a favour.

I was having problems with my central heating boiler and, as I knew Ray, and as as he seemed honest to me, I asked if he’d come over and look at this. He was initially reluctant, he is in North London and I’m in Southwest London and he’d rather work locally but I convinced him that it was clear that I needed a new boiler, mine was last replaced in 2001 and leaked continually, and that as another plumber had told me that all our radiators and plumbing would also need to be replaced it would probably be worth his while.

Ray turned up on time and poked around the system for a while. He decided that the radiators and existing plumbing were probably OK – and that we could replace anything that leaked as we went. He gave a me a quote for a new boiler, which included all the other parts and materials required and encouraged me to go and check prices for the boiler online so we could see that he wasn’t marking up the price.

I was a power flushing cynic. The very idea that it was worth paying a sum of several hundred pounds to have an engineer wash warm water through your plumbing to dislodge old bits of rubbish, mainly rust, sounded like the ultimate con trick to me. It was clear though that this needed to be done for the warranty on the new boiler to be valid. I am cynic no more. The amount of rubbish that washed out of our system impressed even Ray, who was happily taking pictures of the filthy filters of his power flush machine, and who came back the following day to give it another go as he suspected his machine hadn’t caught it all.

Ultimately all is fine. We have a new boiler, that heats both hot water and the central heating much better than the old and which is so quiet you need to look at the control panel to tell if its on, really hot radiators, a remote thermostat so we don’t need to go to the boiler to change the temperature, a permanent magnetic filter to catch any remaining bits of rust in the system, We’ve kept our existing radiators, but with new valves, and a couple of other tidied up bits of plumbing that I’m not sure were on the estimate but which offended Ray’s professional eye so he did them anyway.

Ray’s estimate was 40% lower than the other one I had. He ended doing did more work than was costed in getting the old radiators sorted out but charged me the estimated cost. I’m quite frankly amazed.

More about Ray. He is a pleasant and reliable chap, he turns up on time, works tidily, cleans up behind him and takes his rubbish away. I really cannot recommend this guy highly enough. If you can get him to work for you I’m sure you will be delighted with his service.

Let’s face it. Boiler replacement is a boring subject and involves a capital cost. As humans these are two very good reasons to avoid this. Let me give you three (and a bit) reasons why you might want this on your todo list.

Living in A Warm and Quiet House

A boiler nearing the end of its life won’t keep the entire house warm and may make annoying noises (kettling). Regardless of temperature settings, the radiators probably won’t get as hot as they did when the equipment was running efficiently. A new boiler will be quiet and efficient.

Older boilers are often difficult or expensive to repair as components for them may not be available. Like all devices you depend upon they can be trusted to break down at the most inconvenient time leaving you without heat or hot water until they can be repaired or replaced.

While some companies will try to tell you that energy savings will be significant unfortunately the statistics in these reports tend to compare very old equipment to the most efficient models on the market today.

Although your savings might be more modest, emergency repair costs will vanish, and that could result in substantial savings for a family whose boiler has been breaking down regularly for the past couple of years.

Surely having a warm and safe house is priceless!

If your gas boiler is more than about 10 years old you may get more reliable performance, and save money in fuel costs, by replacing it. Here’s the least you need to know:

There are two main types of gas boiler, Traditional boilers – which store their hot water in an insulated hot water tank and Combi boilers, which produce hot water on demand.

Combi boilers usually require simpler and less expensive plumbing, provide the ability to have a bath or shower on demand with no need to wait for water to heat up, and use less fuel. Traditional boilers can have the edge where large amounts of the hot water are needed at the same time for example in a larger house with multiple bathrooms.

While replacing an older traditional boiler with a fuel efficient Combi is often a good idea this will often involve replacement of some of the existing plumbing.

These rate efficiency, the amount of gas turned to heat on a range from A to G. You’ve probably seen the rating stickers on electrical appliances like fridges and washing machines. A-rated appliances should be extracting 90% or more of the energy from the gas. Older boilers ae much less effective and become less efficient as they age. Replacing an older boiler with a more efficient boiler will save you money on your energy bill.

Give me a call if you’d like to discuss this. I’m happy to advise and quote you for a replacement if you choose to do this.

A quick safety briefing as I’ve been reminded that this week is Gas Safety Week.

Gas is a safe and cost-effective way of heating homes and business premises providing that it is completely burned with any fumes safely vented to the open air. A product of the burning of any fuel is Carbon Monoxide gas (CO) Carbon monoxide gas can’t be seen, smelled or tasted, but can kill in minutes.

The main risk of carbon monoxide to the average person comes from faulty gas fires and central heating boilers in the home and workplaces, and from vehicle exhaust fumes in poorly-ventilated spaces.

Low exposures to CO can lead to unexplained feelings of tiredness or flu-like symptoms. Higher exposures, especially while you sleep, can be fatal.

The NHS records about 40 deaths a year in the UK caused by CO poisoning with about another 400 people attending hospital for treatment. Many people think that their smoke alarm will detect CO, they don’t.
Don’t risk the life of yourself or your loved ones by ensuring your gas appliance are regularly serviced. Please give me a call to book a simple safety check.

Consider also fitting a CO detector in your home. They take just a few minutes to fit and cost as little as £15 from DIY stores and supermarkets.

Water shortage is a reality in the U.S. The drought in California showed just how hard it can be for Americans to live life without water. Everyone needs to do his part to ensure water is never wasted, so with that in mind, here are five incredibly simple plumbing tips to prevent wasting water at home. In the UK we are not short of water, but wasting water has a negative impact on the environment and can cost you money.
END_OF_DOCUMENT_TOKEN_TO_BE_REPLACED

When you have a clogged toilet, naturally, the first thing you grab is a plunger. Now ask yourself this: how long does it actually take you to unclog your toilet? Do your unclogging duties turn into a battle every time, leaving a lot of frustration, not to mention a mess? Believe it or not, there’s actually a proper way to use a plunger, and even if using it seems simple enough, there’s plenty of ways that you can do it wrong. Here are some helpful plumbing tips for homeowners to make your life a little easier:
END_OF_DOCUMENT_TOKEN_TO_BE_REPLACED

The importance of the simple tap cannot be understated—whether you’re taking a bath, washing clothes, or cleaning your home. A tap that’s not performing as expected can lead to a lot of household problems, from unfinished chores to extensive water damage leading to expensive repairs.
END_OF_DOCUMENT_TOKEN_TO_BE_REPLACED

A boiler is integral to the comfort and health of your home, so it’s important to choose the best one for your needs. Unlike decades-old boilers, today’s modern boilers are considerably more energy efficient, sometimes by up to 35 percent. If you’ve had your boiler for some time, in all likelihood, it’s consuming more energy than it should. Consider replacing your old boiler as soon as possible to see some improvement to your utility bills. Here are some boiler replacement info for you to review.
END_OF_DOCUMENT_TOKEN_TO_BE_REPLACED

Replacing your old, failing boiler with a new energy-efficient one can help save you money and frustration this coming winter. However, the process isn’t as simple as picking a new boiler you like. Although aesthetics do come into play when shopping for a new boiler, there are other key factors for you to consider. So review these boiler replacement facts carefully.
END_OF_DOCUMENT_TOKEN_TO_BE_REPLACED 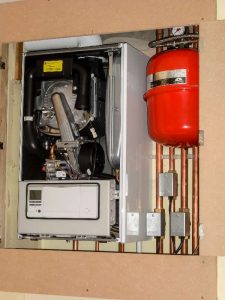 A boiler installation in Hampstead.

A boiler losing pressure is a symptom of many issues that commonly arise with boilers. A low pressure boiler is quite simple to identify, as most boilers today come with a built-in pressure gauge. Sometimes, it’s possible to solve your boiler’s loss of pressure yourself.
END_OF_DOCUMENT_TOKEN_TO_BE_REPLACED

Our support Hotline is available
Monday-Friday: 8am to 10pm
Saturday – Sunday: By Special Appointment
Holidays: Closed